Artists Felicity Ford, Kayla Bell and Claudia Figueiredo are teaming up this summer to bring you The Fantastical Reality Radio Show in association with Mundane Appreciation. The radio show has been commissioned by Brighton’s RadioReverb 97.2FM and will feature at the Sonic Arts Network EXPO 4 – 6 July 2008. The Fantastical Reality Radio Show will be broadcast on RadioReverb 97.2FM and will offer and fresh and celebratory view of everyday sounds.

The Fantastical Reality Radio Show aims to draw listeners into an entertaining exploration of ordinary audio. Ranging from a Top Annoying Domestic Noise Chart to games like Imitating household noises using just the voice, the radio show will excavate immediate situations for audio intrigue. Playfully collapsing the borders between what is normally considered to make ‘boring’ or ‘interesting’ listening, The Fantastical Reality Radio Show is intentionally affirmative and builds on the artists’ former experience of working on participatory projects.

Five shows in total will be recorded over the next couple of months and listeners will be able to submit their views, audio clips, images and opinions in the forthcoming website at www.fantasticalreality.com. At the EXPO, Mundane Appreciation will be out in full force with roving investigators, an interviewing desk and a Game Show area where visitors will be able to join in and become a part of the show.

Felicity Ford is doing a PhD on The Domestic Soundscape and the presentation of everyday sounds to audiences. Mundane Appreciation, founded by Figueiredo and Bell in February 2007, is an agency devoted to promoting and exploring the processes of day-to-day life.

Having gathered recent professional experience showcasing their individual projects at events like The Battersea Affordable Art Fair (Mundane Appreciation) and The UK Stitch’n’Bitch Day (The Missability Radio Show) these artists are keen to see what happens when they match their skills and current fascination with everyday reality and interactive projects.

To speak to any of the artists involved or to get more information on this project, please email felixbadanimal@hotmail.com or telephone 078 3513 6201 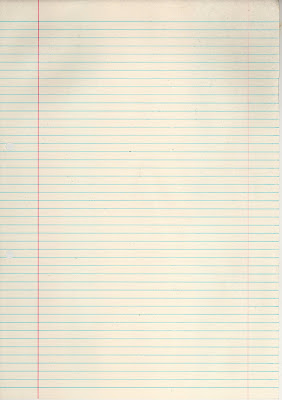 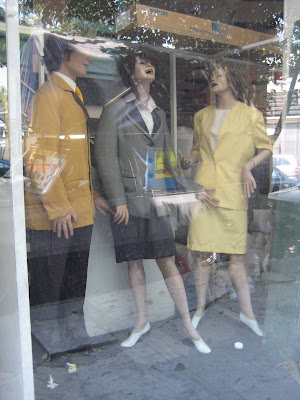 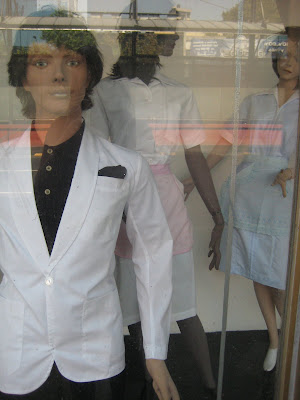 We have both decided that our air hostess/promo girls look needs to be re-vamped and  have challenged each other to create a new outfit.
On my quest for a inspiration for our new attire I took the Metro-Bus to Oskar's Uniformes in the La Roma district. I had passed Oskar's Uniforms on many occasions and thought it a perfect place to investigate a new uniform.
This was my first time on a Mexican bus, if you have visited Mexico City you would understand my reluctance to board the more usual buses 'Peseros' (so called  because the fare was 1 peso) These buses are like no other buses I have seen with their green and grey colours, their boxy form is extraordinary with an angular bonnet much like a child would draw, some are accessorised with alloys and skull shaped break lights but most look like they might disintegrate at any moment, they are strapped together, filled and welded. Lights are not so easy to mend, most have no indicators and nearly every bus you pass has ominous gashes running along its body work. The Peseros race one another to their fares, the buses are private, so the fare the drivers make goes straight into their pockets or towards paying the owners of the busses. To get ahead in this race the drivers take no notice of red lights they switch lanes without signalling, ignore the police and stop for their fares wherever they like as there are no actual bus stops. This haphazard bus service is Hated by the middle class but provides an invaluable service to the poor.
The Metro-Bus is a much more tame service, It's operated by the city and runs along the centre of Insurentes, a thirty kilometre avenue that dissects the city from north to south. The service offers platforms instead of bus stops, The bus doors open at shoulder height from the ground but equal height to the platform. There are platforms at kilometre intervals all the way along Insurentes and the bus stops at everyone. It is genius that the name of this service describes its function so well.
I rode the Metro-Bus from Olivia to Alvaro Obregon. Oskar's Uniforms has a corner plot, I had imagined it to be a huge department store of uniforms, where I could dress up as a nurse, petrol pump attendant, maid, or police woman. Sadly however Oskar's failed to live up to my playful, if juvenile expectations! The window displays on the ground and 1st floor were frustratingly inaccessible, closed off behind dirty windows. When in the store It was clear there would be no playing, all the uniforms were folded neatly in plastic bags and shelved. Between myself and the shelves was a huge wooden barrier/counter and a woman imediatly began asking me if she could help me. I thought it easier to say  i was looking for uniforms for my boss, and needed to take pictures of examples for her to see. I realised too late that I had pronounced the word boss incorrectly, instead of 'jefe' (pronounced hef -ay) I said chef (che-f) - a cook and was handed a catalogue of chefs clothes, nice but not exactly what I had hope for. I tried again, but my Spanish was not up to it plus the closer I was to the uniforms the less I liked them and as I couldn't try any on the fun had gone so I made a swift exit, documented the scene and rode the bus south.
Now I'm thinking red gingham blouses with navy pencil skirts.
3 comments: