Out and About with Mundane Appreciation: A blood analysis cubicle. Mexico City 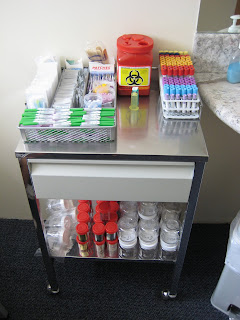 My daughter has caught a so far unidentified bug, throughout last week we were sent all over the city for all sorts of gruesome tests, made all the more difficult by my lack of fluency with the language as well as with the unfamiliar healthcare system. By friday, for her second lots of tests we headed for a nondescript clinic in San Angel. We drove, getting lost only twice in the lunch time rush. Once at the clinic I was handed more forms to fill out ( i used a black medium rollerball pen). We sat next to a water cooler with one broken flipper - tepid- hot and ice cold still worked.
Half an hour later we were ushered through a dark wood laminate door and told to wait. Inside the tiny room was the most brilliantly arranged table. We both immediately felt better, and had something to talk about other than illness. Which coloured blood vial we preferred? Which was our preferred stacking system? And what was the best angle from where to admire the table. 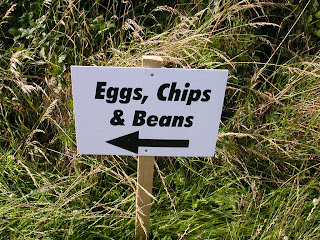 The joy of Mundane Appreciation has reached beyond the Watford Gap! - cue sound of cheers and the smooth swish of the unravelling of streamers!

Hello. A friend of mine called Adam suggested I send you this photo.
I live in rural Lancashire and like to get out into the countryside on my bicycle. At the weekend, I saw several signs that had appeared on the grass verges, with arrows pointing the way. Oddly, the signs said, "Eggs, chips and beans". They were pointing the same way as my route home and appeared to be directing people into a horse farm, where some kind of showjumping event appeared to be happening. Even more strangely, the final sign pointing up the drive of the farm read "fan belt". What can it all mean?
Regards,
Keg
No comments: 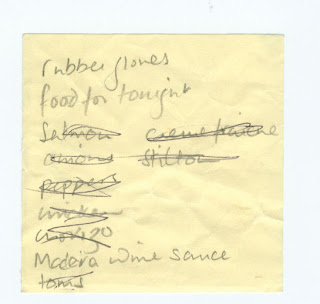 Earlier in the week, Mundane Appreciation received a fascinating email from Jane, she was kind enough to send in scanned images of shopping lists she had found abandoned on a trolley clip board.

"Found at Waitrose on 19th August 2008. One written on yellow post-it, other on plain white pad. Curious though that they had both crossed things out as they bought them? Or had got them elsewhere... I never do that. Enjoy!"
- and we will and do, thank you jane.
No comments: